This is just a quick one, but it's something that I have been thinking about, and that is of interest in archaeology, as it is about how symbols and their material expression change meaning over time.

In Daniel Radosh's book Rapture Ready, he discusses the world of Christian pop culture. In it, he describes a man who has developed a symbol that he calls The Smiling Cross. It's weird, the adaptation of a sign of torturous punishment into an anthropomorphic smiling figure. 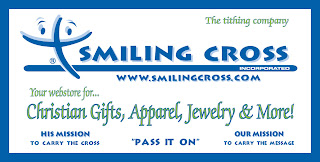 But how did it get here? That's the interesting thing.

The cross began as a tool of the Roman state. It was used by the Romans to execute criminals*, a death that was long and agonizing. Moreover, the cross with the corpse could be left up for a while, if the authorities deemed it good that the people see the body on display (either as a deterrent, or to show the people that a hated criminal had been caught). 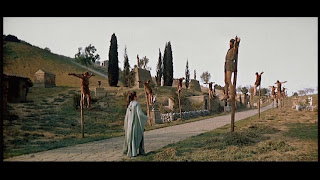 As the Roman Empire declined and eventually fell, the cross would come to be taken as a sign of the Christian religion. The cross took on meanings associated both with Roman law enforcement and with Christianity.

As crucifixion fell out of favor as a form of capital punishment, the association with execution began to be shed. Yes, the Bible and most history books speak of this, but crosses are no longer used for execution, and the only place where westerners would see crosses was in churches. As such, the cross became a purely religious symbol for all but a few historians. At this time, though, the cross was still tied to the notion of Jesus' torture and death, important events in Christianity, as they also lead to the redemption of humanity. 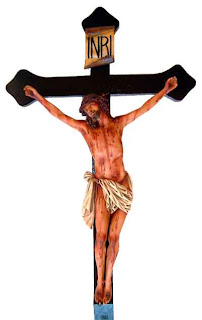 Over time, though, the image of Jesus on the Cross became less prominent than the cross itself. There are a number of really fascinating reasons why this happened, including an abhorrence on the part of many Protestant reformers with "graven images" and the rise of theologies that held that the notion of redemption was more important than "the passions" (Jesus' horrible death). At this point in time, the image of "Christ the Sufferer" is largely Catholic, while most Protestant sects focus on a more serene Christ in their iconography. And so, images of the cross in protestant circles are usually generic symbols bereft of the image of Jesus: 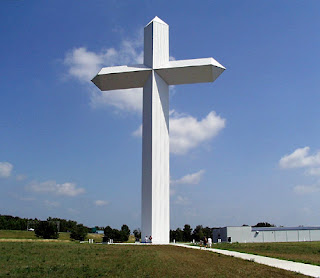 And images of Jesus are usually free of any sign of passion, showing him as contemplative or devoted, but not suffering: 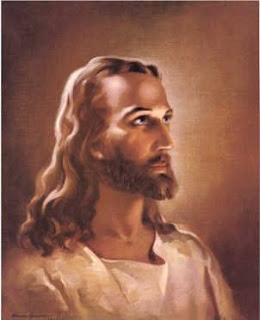 The end result is that the cross came to be seen as an abstract symbol of Jesus, rather than the sign of his execution. Yes, most Christians are aware of the fact that it is based on the method of execution, but that doesn't change the fact that the immediate mental connection is with Jesus and not the death penalty. And so, the Cross becomes a stand-in for Jesus. And as the cross has become a symbol for Jesus himself, rather than for Jesus' death, it has also become associated with the properties attributed to Jesus, and as "Christ the Lamb" has become ascendant in Christian theology, this means that the Cross is often seen as a friendly symbol rather than a symbol of suffering and redemption. And so, the Smiling Cross, as bizarre and even sacrilegious as it may seem, is really just a continuation of the trajectory that a symbol representing Roman capital punishment has been on for a long time.

I just feel bad for Kevin Smith. He thought that he was being really clever with Buddy Christ... 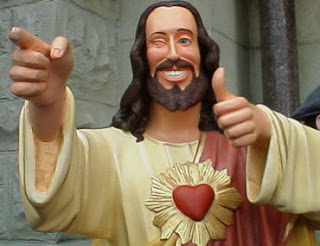 Only to be outdone by reality.

*One of my history professors in college always liked to point out that crucifixion was a Roman form of execution, the Jews in the Roman Empire used the old reliable methods of Stoning people to death. So, when people talk about the Jews "killing Jesus" they are factually incorrect - it was the Romans who did so. Assuming that the account in the bible is correct, which is a dubious assumption, the Rabbis did political maneuvering, but the Romans did the rest.
Posted by Anthroslug at 10:56 AM

Nice post. Sometime early in adulthood I read a book where the evil bad guy crucified people. I haven't looked at a cross the same way since. It's struck me as a little morbid that the cross is being used as a religious symbol for a religion that claims to be the "good guys." The good guys use a symbol of torture? Thanks for the walk through the history of this image.

I still think it's creepy.

Bill Hicks used to include a section in his shows about how Christians wearing a cross was abit like followers of John F. Kennedy wearing medallions shaped like crosshairs.

He would then explaint hat the reason why Jesus hasn't returned is that he's waiting for his followers to stop wearing symbols of his painful execution.