So, you may have heard of the show Ancient Aliens.  It is on the History Channel and is basically the latest iteration of the old bullshit that alleges that the various ancient achievements of humanity couldn't have possibly been accomplished by, well, humans, and therefore it must have been aliens!

You can probably guess my reaction to this proposition.

However, like so much of the rot that's on allegedly educational television, I just sort of ignored it.

Until about a year ago.

I don't know what the hell happened, but around December 2010/January 2011, a frighteningly large number of the people that I know and encounter began to watch this damn show.  Not just watch it, but began to take it at least slightly seriously, as evidenced by the fact that I now have to routinely explain to people why producer/on-screen personality Giorgio Tsoukalos is, perhaps, not the best source for information regarding Earth's past.

On a fairly regular basis, both family members and friends contact me, by phone, or email, or just walk up and start talking to me, wanting to know about the claim that the ancient King Hamburgular of southern Podunkistan was actually a reptoid alien based on the artistic representations of him as a snake found on friezes in his palace.  I then have to explain that the friezes in question actually show King Hamburgalar's zoo, and the reason why the images look like snakes is because they are, rather clearly, images of snakes.  If the person is at my home or visiting my office, I then pull out a book on southern Podunkistan archaeology in order to prove my point.  The person with whom I am speaking will then assert that they never really believed it, but thought it was a fun idea, and wanted to ask.  But, of course, they began the conversation insinuating that they find the claim plausible, even if they didn't completely buy it.

A week later, someone, often the same person (there's a rotating cast of around seven of them) will come to me with the latest lame-brained claim from Giorgio Tsoukalos and the Ancient Aliens swarm.  And the process repeats. 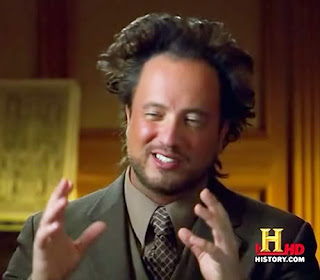 Giorgio Tsoukalos.  Gaze into the hair of madness!


I can not, for the life of me, figure out why otherwise intelligent people think that this guy has any credibility.  Leaving aside the fact that he has a surname that sounds like a Yiddish slang word for one's posterior, and that he looks like he failed to learn Don King's hair gel secrets, there's the fact that Mr. Tsoukalos never met a specious claim or false "fact" that he didn't like.  This guy has been a fixture on pseudo-science and pseudo-history shows on Discovery and the History Channel for years, and he's never made a damn lick of sense.  He always goes for whatever outrageous claim is made, no matter how clearly stupid it is, and will insist that "anyone who is open-minded" has to accept his claims, while managing to show himself to be so closed-minded that he is ready to ignore the mountains of evidence showing himself to be full of bovine feces.  On my list of trustworthy people, Tsoukalis ranks just above Biblical creationists and just below used car salesmen in plaid jackets.

Nonetheless, I have enough interactions with people who don't know how to identify someone who's pre-frontal cortex is clearly being devoured by his own hair that I have developed something of a formula for talking to people about this show.  In fact, I think that I can convert that formula into a simple questionnaire, available for anyone to use:


1.  Is the culture depicted as influenced by aliens non-European?*

2.  At what point in the episode did someone insist that "establishment" archaeologists are "hiding the truth" or "too cowardly to face the evidence?"  How many times was this assertion repeated after the initial statement?

3.  Did the person making the statement also make statements indicating their ignorance of the fact that an "establishment" archaeologist can get more grant money and positive attention actually for proving a radical theory than by trying to crush it?

3.  Are the aliens said to be humanoid or reptilian?  Are they extremely tall, or quite squat?

4.  What best describes the shape of the alien spaceship: A) Dinner Plate; B) Cigar; C) Arrowhead; D) Hamburger?

6.  Please circle each of the following items that it is claimed in this episode was part of the ancient knowledge that is being covered up by archaeologists:

The Existence of the Soul

The "True extraterrestrial" origins of humanity

Why people ever thought that Jim Carrey was funny


7a.  How many times during the course of the episode did the "experts" compare themselves to (or compare their claims to the theories of) either Albert Einstein, Isaac Newton, or Galileo?

8a.  How many times per episode did somebody state that they would easily give up their "ancient alien" claim if only there were another explanation available?

8b.  How much video was then given over to that individual going to a library, or even doing a Wikipedia search, to look up other possible, non-alien, explanations?

10. Was quantum physics at any point mentioned as an explanation for anything in the episode?

Now, fill out this questionairre for each episode watched.  Keep the questionairres, and once you have seen ten episodes, begin looking for patterns.  If that doesn't convince you of the level of bullshit that the Ancient Aliens crew likes to produce, you may want to consider upping your medication dosages.


*This is important, as it is typically not white people who are accused of being incapable of developing civilization/technology/non-stick pan coating.  If the alien-influenced culture is European, the claim is still delusional, but at least it's not racist.

**Just pointing this out - if you insist that everyone else look at your work and take it seriously, but you refuse to look at the work of the professional and trained people who have dedicated their lives to this, then you are a tool and a hypotcrite.
Posted by Anthroslug at 10:00 AM

I don't watch Ancient Aliens, as I'm much too skeptical to consider alien visitation much of a real possibility. But, until you referred to it, I had never considered the racist elements in the assumption that "primitive" cultures certainly couldn't do X or Y.

I had never thought of it either. It is pointed out in the book Frauds, Myths, and Mysteries by Feder, where he discusses the fact that very few magnificent European construction projects (such as, say, the Roman Aqueducts or Coliseum, or Greek Temples) are credited to aliens, but similar structures from South America, North America, and Africa frequently are.

It really got me thinking.

I work with an otherwise good man who likes to talk about this show. When I counter every assertion made by the show (as best I can), he still insists that in total it adds up to real evidence.

Yeah, I like to call that the "Sam Spade Defense" after a speech that the character gives at the end of The Maltese Falcon. He lists a large number of reasons for doing something, admits that they aren't necessarily good reasons, but there's just SO MANY of them!

All the assertions are to be taken with a grain of salt, as does anything from any religious texts.