Apparently Yes, I can HAZWOPER

So, as noted in the previous entry, I have had to attend a class to get a certification that allows me to work with hazardous waste.

Yes, that's right, I am now authorized to work with hazardous waste. Do not be alarmed. Be afraid. Be very, very afraid.

Unlike the previous week, most of what we went over this last, and thankfully final, weekend was at least somewhat applicable to my job, and therefore much more worthwhile. Which isn't to say that it was any fun, because it wasn't. Still, it's over, and a few amusing things did happen over the course of the weekend.

The safety personnel from Hazard Safety Services Incorporated continued to show that they considered this class to be a joke, disrupting with smart-ass comments and continuously providing stupid answers to the instructor's questions, which means that I will walk off of any site that these guys are responsible for - if your safety people don't take their training seriously, then the shit will hit the fan on one of their sites eventually, and it is best not to be present for that. On the up-side, the instructor did make one of their number, the guy who I had taken to referring to as "Princess Diana", do laps around the classroom while wearing a full class-A hazmat suit, and pressing down on the twit's shoulders. He later threatened to duct-tape and taze the kid. 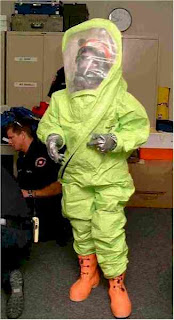 Unfortunately, when Princess Diana quieted down, one of his buddies picked up and began rambling about zombies and 2012 end-of-the-world nonsense. So, the irritation continued to flow.

On Saturday, I walked through a group of fellow students who were having an in-depth conversation about their time in prison. One of these guys later interrupted the class to inform everyone that the reason why Harold Camping's Rapture prediction was wrong was because "if Camping was telling the truth, it would make Jesus a liar, and that can't be man, because..." and then he began trying to preach at us until the instructor, who you may remember looks like a hybrid of a professional wrestler/Hell's Angel/hipster/driver's ed. instructor gave him a glare that made the guy shut up. Later that same day, the same guy also, appropo of nothing, decided to shout out that non-dairy creamer is flammable. He later tried to disrupt the class again to talk about contracting Valley Fever while in Prison.

I wonder what it's like to be in prison and have Tourette's.

All the while, there was an umkempt, greasy fellow who looked for all the world like Comic Book Guy from the Simpsons. On the first day, the previous week, he had tried to impress me with his interest in "morally ambiguous" characters in literature, but quickly showed that he was far more interested in the cartoonish violence doled out by such characters when they appear in Conan-derived fantasy novels. This week he decided that we were buddies, and spent the weekend trying to regale me with stories to show how cool he was, but all of which were plainly bullshit - my favorite was a story about a buddy of his who "is in the Marines, a special anti-terrorist taskforce, who had a gun pulled on Osama Bin Laden, was only ten feet away, but his commanding officer ordered him to let Bin Laden go!"* He then spent some time pestering me to try to get me to hire him as an "archaeologist's assistant." This was when he wasn't rambling on about movies, comic books, or other entertainment that I didn't care about, and about which he would continue to ramble at me even after I had informed him in no uncertain terms that I didn't care. He also took to cracking fart jokes at every opportunity. I began to spend my breaks pretending to answer email on my phone or else hidden away just to avoid this guy.

Through all of this, the instructor continued to be an imposing and amusing figure. In addition to his tormenting the HSSI morons, he also informed us of how to dispose of a body if working in the oil fields, discussed the bomb shelter that he owns in Montana, and just generally made himself a weird, amusing character who I would swear was made up by a hack writer if I hadn't seen him. He also had a dimple on the back of his head, which might be where his keepers plug him in at night.

Oh, and in case you feel safer knowing that people working with hazardous waste have this training - they spent the better part of an hour trying to figure out the boiling point of a flammable solid. Oh, and one of them, I believe it was the would-be preacher, began to tell the instructor about how, if a federal official "disrespected" him, he'd attack the federal official, and seemed genuinely surprised when he was told that this would get him arrested.

Oh, and I was put in charge of a field exercise because I was the only person in the class who both had supervisory experience and did not have anger control problems.

Sleep tight America, your hazardous materials are in safe hands.

And it wasn't just the class that was strange. While walking out onto the lawn during a break, a fellow in an orange safety shirt ran by, ran out onto the lawn, dropped onto all fours, and then began moving in a manner that can only be described as dry-humping the air. At my hotel, some random guy walked up to me and wanted to ask my opinion of St. Louis, Missouri politics and the current weather problems there, which would have made sense if A) I had ever met this guy, and B) I knew anything about the subject or said/did something to imply that I did...as neither of these is the case, it was just odd.

*Now, don't get me wrong. As weird as the notion of Bin Laden being let go sounds, historically, equally strange things have happened. So, if 20 years down the road evidence comes out that this sort of thing occurred, I'd be surprised, but not overly shocked. I just really doubt that this guy's ever-so-bestest friend from high school was the one who had him.
Posted by Anthroslug at 10:00 AM

Labels: education, The Business of Archaeology

It sounds like you attract the same people I do. I don't know how we manage it.

There was an individual I always remember, who fortunantly I didn't have to deal with directly, from an EMT course I took some years ago.

One of the accident scene rules, at least here in California, is that the police are in charge. This is jokingly refered to as "The guy with the gun is in charge." Well this indiviual had come upon an accident, and decided to take over. Even after the police arrived, he felt he'd got there first, and should be in charge. He eventually was arrested for being a nuisence.

He was now applying for a permit to carry a concealed weapon, and wanted the instructor to vouch for his character. Why did he want one? So at the next accident, HE'D be "the guy with the gun", and could be in charge.

I have no idea if he actually got the permit.

Right, so he could get arrested both for interfering with the actions of a law enforcement officer and for assault with a deadly weapon.

I tells ya', there are times when I am very worried about the people who we license to do dangerous work.