A few months back, while I was sitting in a hotel room with the air conditioner turned up full-blast in the vain hope of avoiding the 110 degree evening in western Kern County, I received an email from a friend of mine who works at Lucasfilm (appropriately, Return of the Jedi was playing on the television at the time). She informed me that Lucasfilm is in the habit of bringing in experts in different fields to speak about what they do in the hopes that this exposure to other lines of work and points of view will benefit the employees both as professionals and as people.

On the whole, a pretty cool idea, really.

My friend had informed her boss that she knew an archaeologist, and so he asked her if the archaeologist would be willing to come and speak. This email that I had just received was the invitation. Without hesitation I responded in the affirmative, not having the foggiest idea what I would talk about.

However, I have, over the source of my career, been very vocal as to the necessity for archaeologists to address the public in new and creative ways (I am a particular admirer of blogger DiggingtheDirt's idea of archaeology gigs), so I figured that I really ought to do this.

And so, sandwiched in between a lot of last minute project deadlines and too much travel, I have been writing a presentation, titled (at my friend's suggestion) "Ewok Archaeology." I am looking at two different groups from Star Wars - the Ewoks and the Sand People - and attempting to use anthropological/archaeological theory to fill in many of their gaps. It's been an interesting project, working my research muscles on a fictional creature, and I am quite enjoying it.

However, I am very nervous about the presentation (public speaking is always nerve-wracking). Still, this may be a way of subtly introducing archaeology and anthropology into places where most people wouldn't expect to see them, and that is very cool. 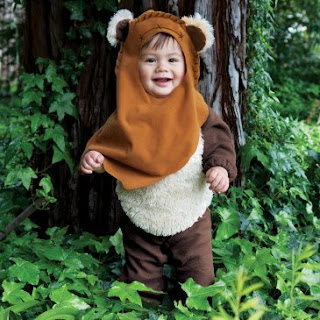 In retrospect, the University of Corruscant should have seen the flaws inherent in sending children out as ethnographers. However, nobody else would fit the costume.
Posted by Anthroslug at 7:44 AM