Long Walks Arguing on the Beach

A few years ago, I was walking down the beach in Aptos, CA. I had gone out to take photos, and was generally having a good time minding my own business, when I heard, from behind me, "Pardon me, but what does this mean, 'The God Delusion'?" 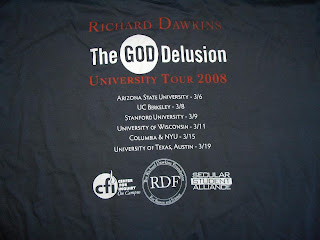 I had forgotten which shirt I was wearing. It was one that I had picked up at a Richard Dawkins talk a couple of weeks earlier. So, now, I was of two minds on this. On the one hand, I know perfectly well that going around wearing a shirt that says "The God Delusion" is likely to get some people worked up, and that if I wear such a thing, I'd better be prepared to deal with the displeased. On the other hand, if I were wearing a pro-religion shirt (pro-Christianity, or in the area in which I live, pro-whateverasianorpsuedonativeamericanreligion), then I'd likely be able to go about unmolested. And, really, I fail to see how my shirt (which essentially indicates that I believe that all religions are probably wrong) is different from a pro-Christian shirt (which, by the nature of Christianity, essentially indicates that the wearer believes that all other religions are definitely wrong) in it's "insult anyone who doesn't agree with me" factor, and therefore I don't see any good reason why I should get any more guff than they guy with the "Sins washed by the blood of the lamb" or "Christ or Antichrist, there is no other choice" shirt (yes, I have seen this shirt, as well as a bumper sticker).

Still, there's the way that things should be, and the way that they are. So, I stood up a bit straighter, and turned to face the person addressing me, ready to have to argue.

"Well, it's a book written by a guy named Richard Dawkins. He argues that, as there is no real evidence for a god, and that the evidence that people tend to cite for a god doesn't really stand up to scrutiny, it is not reasonable to conclude that there is one."

"Oh," the fellow considered this for a moment, "I would argue that it is a bad idea to state that there is nothing simply because there is no evidence for something*."

So, I responded that simply not being able to disprove something doesn't make its existence as likely as its non-existence. And he responded quite intelligently to that, and we both began walking. In all, I spent the next hour walking down the beach with this complete stranger, debating religion in a pleasant way, and in the end, we shook hands and went our separate ways.

Did either of us change the other's mind as regards theism? Probably not. But this is, I think, an important thing to remember, for all of us. The fellow and I absolutely disagree on the existence of god, but he was not some bile-spewing idiot with a desire to smash all infidels. And he saw that I was not someone who was going to attack him for being foolish. I know that, when my fellow atheists make disparaging comments about people who believe in deities, I have been able to bring my conversation with this fellow up as an example of a theist who was smart, reasonable, and a decent guy. I hope that, when he is around fellow believers who make similar comments about atheists, he is able to bring me up as an example of an atheist who did not meet the negative stereotypes.

I am under no illusions. I doubt that supernatural beliefs will ever go away. I also doubt that there will ever be any religion that manages to convert the world. So, while there are times and places for argument and even fighting, it does us well to recognize that even our most vicious opponents are human. Persuading everyone on the planet of a belief or lack thereof will never happen, and there will always be those who wish to push their beliefs on others, but we can reduce conflict simply by humanizing the other, and learning to defend and argue for your position while not being a dick is a huge step on that path.

*Ahh, the ol' agnostic defense. The problem, of course, being that it assumes that the person with whom you are arguing is convinced that there is no god, rather than simply concluding that there is no reason to believe in one (a subtle but important difference). Also, it essentially assumes that if neither of two potential positions can be 100% proven, they must both be equally likely - a position shown to be absurd by Russell's Teapot analogy (updated as The Flying Spaghetti Monster.

I also like my own "Gillian Anderson Argument" - I can not prove that, when I head home tonight, Gillian Anderson will not be there to serve me dinner. Neither can I prove that she will be there. However, this does not mean that there is a 50% chance of her being there. In fact, as there is no evidence supporting the claim that she will be there, and there are many logistical problems with the idea of her being there, I must rate that probability of such a thing occurring as being very low. Likewise, there are many things about our universe that one would expect to be rather different if there were a god, and so simply not being able to prove that there is not one does not raise the possibility that there is one to 50%.
Posted by Anthroslug at 7:19 AM

Ah, but in that case I could at least sympathize with at least some theist arguments: "I don't know how I'd get through the day if I didn't believe in the possibility that Gillian Anderson could be waiting at home for me." Or equally understandable, "I don't know if I want to live in a world where Gillian Anderson definitely isn't waiting at home for me."

I can even kind of understand the argument; "If Gillian Anderson isn't waiting at home for me, I don't know what would keep me from killing someone."

You know, we should totally start a religion.